a new cultural destination for the city

Work has got underway this week on the transformation of Worcester’s railway arches into a major new cultural quarter for the City.

As the latest phase of the ambitious The Arches – Worcester project, workers are now on site to refurbish and repurpose the Victorian arches, following the appointment of contractor Speller Metcalfe.

An initial five railway arches located between Foregate Street Station and The Hive will be converted into studios and workspaces for local artists and creative businesses, with new electrical supplies, toilets and drainage being installed. A number of arches in the same vicinity have already been successfully converted in recent years and are now home to a number of small businesses.

It is anticipated the work will be complete early in the New Year. There will be some disruption to and intermittent closure of the pedestrian route from Croft Road to the City centre on weekdays during works, particularly in the first few weeks, but this will be communicated in advance, with diversions in place. It will remain open over the bank holiday weekend (May 1-3).

The Arches – Worcester, being delivered by the Worcester Cultural Partnership, aims to transform the area into a modern 21st Century workplace for creative industries and a cultural destination for tourists and local communities. It has been awarded more than £3m in funding from the Cultural Development Fund, which is administered by Arts Council England. The Partnership is made up of Worcester City Council, the University of Worcester, Severn Arts, The Arch Company and Worcestershire County Council.

The funding will also be used to create a new key gateway for the city, with a foot and cycle path created following the line of the Victorian arches, linking Foregate Street railway station to The Hive and the River Severn.

A leadership and entrepreneurial skills programme is being developed to encourage graduates and others to seek pathways into employment and business start-up.

A festivals team has been established to deliver festivals and cultural events across Worcester. They will also support festival organisers, encouraging skills development and volunteer opportunities in the creative industries.

David Broster, Head of the School of Arts, who is leading on the project for the University of Worcester, said: “As a University we are committed to making a difference in the local community and enhancing what the City has to offer for the benefit of all. We are excited to see work moving ahead on the Arches project and look forward to seeing this iconic structure, part of Worcester’s Victorian past, transformed into a hub of creativity and culture for the City, providing excellent opportunities for both our students and the wider community.”

“It’s fantastic to see construction starting on site at The Arches – Worcester.  As well as generating a new creative hub for the city, this initiative will also improve links between the city centre and the River Severn,” said Andrew Round, Corporate Director at Worcester City Council.

“In addition to this refurbishment, Worcester has been awarded a further £17.9 million from central Government to regenerate Angel Place.  This will see the creation of a new theatre and performing arts venue less than five minutes’ walk from the Arches.  Together these developments will considerably strengthen Worcester’s cultural offer, transforming the northern part of the city and increasing footfall in the area.”

Matthew Bailey, Small Works Manager at Speller Metcalfe, said: “Speller Metcalfe is delighted to be part of a project that will breathe new life into the arches, as well as create valuable space for local artists and businesses. As a Worcestershire-based contractor, we also welcome the opportunity to create employment opportunities for trades and suppliers from the local area throughout the build.” 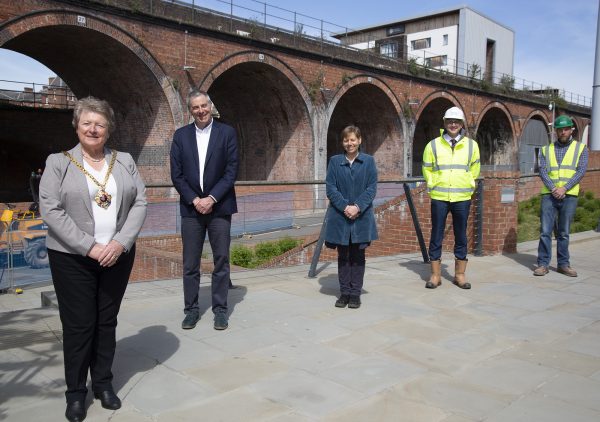