Over the next few months new creative spaces will start to emerge within Worcester’s iconic railway arches, ushering in a whole new chapter in the City’s history. This is a significant phase in The Arches – Worcester project, transforming the arches into a major new cultural quarter.

But how do you go about regenerating this legacy of the Victorian industrial age, into a trendy studio, particularly one that is still in use today?

Five railway arches between Foregate Street Station and The Hive will be converted into glass fronted studios and workspaces for local artists and creative businesses. For the University of Worcester’s Estates team, overseeing the building work on behalf of the City Council and other project partners, the project presents some fairly unique challenges. “There are complexities from working around a railway structure and live railway line,” said Assistant Director of Estates, Mark Evans. “Each of the Victorian arches being refurbished is different in size, so you are not dealing with a consistent structure, and they twist around as the railway line curves, so the front and back of the arch are not the same. As the arches head towards the station you are always going up in height, so the height of the arch gets shorter and you are working on a slope.”

Due to the overhead railway line, the existing structure must remain the same. A roof cannot be formed, so the arches must be lined to prevent water getting in. New water supply, drainage and power are being installed, creating a blank canvas for each creative space. The existing slope means that, to create level access, the ground floor slabs need to be raised.

“One of our priorities was to ensure that it was an inclusive design, making the units accessible to all, including wheelchair users, in keeping with our other developments and ethos here at the University,” added Mr Evans.

This is the next step for an area that has undergone a significant transformation in recent years, including the opening of The Hive, Europe’s first joint University and public library, in 2012, the University’s nearby City Campus and the successful conversion of some of the arches further up already into cafes, pubs and restaurants. It is anticipated that work should be complete in the New Year.

Contractor Speller Metcalfe, on site since late April, has worked on numerous restorations of listed buildings, including converting railway arches at the Designer Outlet Swindon into retail units. Small Works Manager, Matthew Bailey, said they are working closely with the conservation officer, who undertakes regular inspections, and must ensure that all materials used do not damage the structure and are aesthetically in keeping with the existing building. This includes ensuring all fixings, tools and materials used are pre-approved by Network Rail. And, due to working beneath a railway, there are also extra health and safety measures. He added: “As a local contractor, we are extremely excited to be involved in such a high-profile scheme that will be here, we hope, for generations to come.” 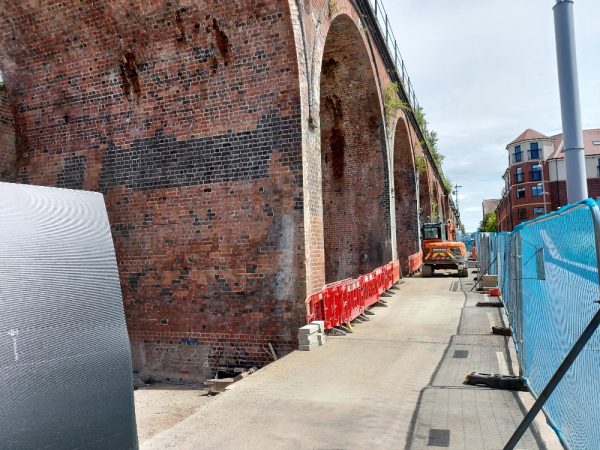 The Arches – Worcester, being delivered by the Worcester Cultural Partnership, has been awarded more than £3m from the Cultural Development Fund, administered by Arts Council England. The Partnership comprises Worcester City Council, the University, Severn Arts, The Arch Company and Worcestershire County Council.